Many recipes claim to be “The Best” Cinnamon Roll Recipe, but, I have spent a lot of time putting them all to the test and came up with the one recipe to rule them all. Over the past years I have tried more than 14 different Cinnamon Roll and Cinnabon Clone recipes, this is the result of my favourite takeaways from each and every one of them. A recipe that has evolved to perfection. And here, I am sharing it with you!

Who doesn’t love a great cinnamon roll right? I remember my first one like it was yesterday. Some of you know, I grew up in Vienna and Cinnamon Rolls are a big thing there although in Vienna they are made with a Walnut and Cinnamon filling (delicious).

Making Cinnamon Rolls at home is not difficult, all you need is a bit of patience and follow the steps closely and voila, your delicious treat will be ready in no time. I often make a batch of 12 or 24 in one go because trust me, they don’t stick around very long. When I made the recipe for the blog and my YouTube channel, I had to film a couple of shots for the ending scene the next day, to my surprise, they where all gone and I had to make a new batch the next morning, THATS how good these are.

Cinnamon Buns have been around for literally centuries, they are said to originate from Sweden where they are called Kanelbullens. Kanel is the Swedish word for Cinnamon and Bullens means buns. Swedes even have an annual Kanelbullens day which is the 4th of October. The Cinnabon version we know today was first launched in Washington in 1985 and is now directly associated with Cinnamon Rolls.

Now here is one AMAZING reason to make these at home, a Cinnabon Classic Roll will cost you around $3.76 or more outside the US. In comparison, making this recipe will cost you (are you sitting?) $0.70c each. You can literally save almost $30 by just making one batch of these.

During my quest for the best cinnamon rolls, I have tried many different ingredients to test the outcome. The list of ingredients I have listed below, are the ones that yielded the best result.

How to make Cinnamon Rolls!

Let’s break the process in to three parts, the yeast dough, filling and shaping and finally the baking and topping.

Before we start working with the dough, we need to bloom the yeast. You can use any type of yeast for this recipe but you have to make sure you follow the right steps according to the type of yeast you are going to use. Instant Dry Yeast is definitely the easiest and fastest way to achieve a good dough. If you are using fresh yeast of Active Dry Yeast, you will need to bloom the yeast first. You can skip this part if you are using instant yeast.

To Bloom the yeast, combine the warm milk with the yeast, salt and sugar. Let it rest for 10-12 minutes. This should form a layer of bubbles on top of the milk. If it doesn’t your yeast might be dead and there is a good chance you won’t get a rise.

Now that the yeast is ready, add the eggs, butter and flour, and knead until you have a soft smooth dough. This can take 7 to 10 minutes of kneading. If you are using a stand mixer (recommended) set it to level 1 or 2 and let it run for the whole amount of time. You can scrape the bowl every 3 minutes so nothing sticks. Line a bowl with a little vegetable oil and roll the dough into a ball. Place it in the bowl and cover the bowl with cling film. Now let it rest in a warm place for 40 minutes. It will double in size.

Lightly press out the air from the yeast dough and palace it on a working surface. It might be a little sticky so use some flour to avoid sticking to your working surface. Then use a rolling pin and roll the dough into a rectangle that’s around 45 cm or 18 inches wide and 35 cm or 13 inches tall. The thickness of the dough should be just under half an inch or 40mm.

The filling is so delicious, yet very very easy to make. Simply combine the cinnamon and brown sugar in a small to medium sized bowl and give it a quick whisk. Using a brush, spread the melted butter over the top side of the dough rectangle. No need to leave an space just cover the whole surface evenly.

Now sprinkle the cinnamon / brown sugar mix evenly over the butter covered dough. Then grab a small palette knife or a butter knife and spread and press the sugar into the dough. It will stick to the butter so no need to be too thorough with this. Now lets go to the final step, shaping, baking and the topping.

There are two ways to shape your cinnamon rolls, I will explain both ways but the first one is my favourite as it creates my famous tower look. Here is how it goes:

Cut the dough (on the long side) into individual strips, each strip should be around 5cm or 2 inches thick. The last one might turn out a little smaller, it will still taste great and be a cute little Cinnamon Roll. Now start on one side of the dough strip and roll it up as tightly as you can without changing the dough shape. Pinch the last part together so it doesnt open up and place it in your baking dish.

Instead of cutting the dough into strips, roll the whole dough (from the long side up) into a sausage shape. It should be 45cm or 18inch long. Now using a very sharp knife, cut the sausage in to roll’s that are around 2 inches thick. Place each slice side facing down into the baking tray.

With both methods, let the dough rest covered for 10 – 15 minutes. This will avoid any breaking or coming apart in the oven.

Here is a great tip, I do this before baking to get extra juicy rolls. Paint the baking tray with some of the melted butter, now sprinkle some cinnamon / brown sugar evenly over the baking tray. Place the rolls on top of this layer. It will seal the bottom of the roll to avoid any tasty filling escaping and it will keep them from drying out during baking.

Bake the proofed rolls at 175C or 345F using convection for around 20 to 22 minutes. Check the colour of the dough, it should be golden brown and maybe a little darker in the top spots. Check my pictures to get a good idea on how it should look out of the oven.

At this point, your cinnamon rolls should be baking and this is the perfect time for you to prepare the cream cheese icing. In a large mixing bowl, combine the butter, cream cheese, salt and vanilla extract. Use a hand mixer to whisk until smooth and combined. If its not becoming smooth and you have little bits of cream cheese floating in your frosting, you probably didn’t have everything at room temperature. But don’t stress, it will all come together when you add the confectionary sugar.

DO NOT add all the sugar at once, add it a spoon at a time while whisking and occasionally taste test to get the desired sweetness. Some like it very sweet others don’t so take your time and stop when you feel its enough.

If you accidentally over sweetened the icing, you can add 1-2 table spoons of fresh lemon juice to take of the edge. 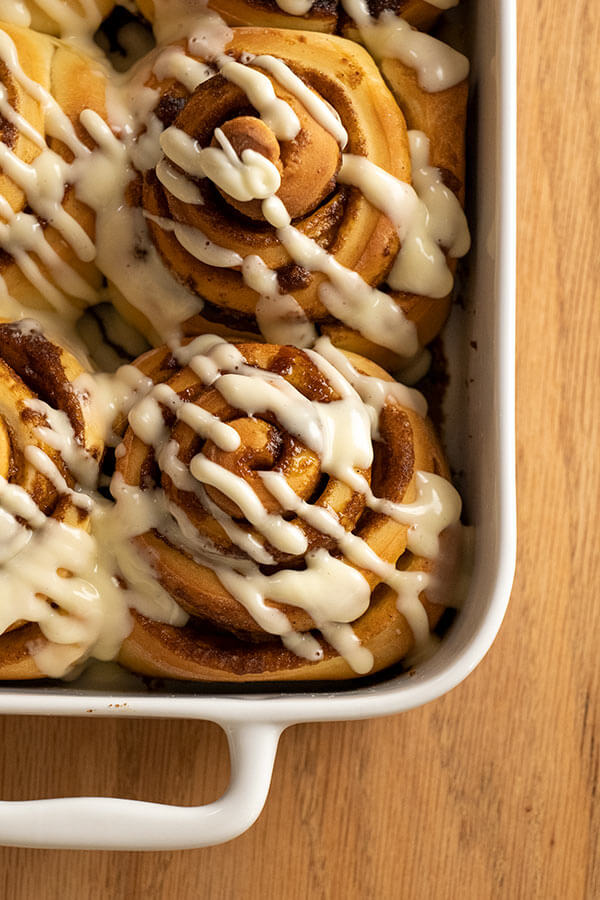 The History of Cinnamon Rolls

Cinnamon originates from Sri Lanka and has used for thousands of years. Ancient Egyptians used Cinnamon for religious practices and embalming making it worth more than Gold in ancient times. The Roman empire eventually brought cinnamon to Europe and Scandinavia where the Swedes created the first type of cinnamon roll called Kanelbulle. Kanel transclates to cinnamon and Bulle to bun so basically a cinnamon bun.

Since the ancient times many different types of cinnamon buns have evolved and eventually the American version we know today was spread across the globe by the famous Cinnabon Brand.

Due to its spiral shape, this pastry is often referred to as a “Snail” in many European countries. Austria and Germany for example call it Zimtschnecke which translates to Cinnamon Snail. Here are some names for this delicious pasty from around the world:

If you want to spice up your filling a bit try and add some additional flavours or textures. Here are some things I’ve tried that worked wonders.

Food Advertisements by
Like 1
Close
My Urban Treats © Copyright 2021. All rights reserved.
Close