Layali Lubnana in English literally translates to Lebanese Nights. This traditional milk, sugar and semolina pudding is flavoured with rose or orange blossom water and topped with Ashta Cream and toasted chopped pistachios. A real taste of Lebanese cuisine that is easy to prepare and just tastes absolutely amazing.

Layali Lubnan is also known as Madlouah, Madlouka and Madlouqa which translates to “spoiled”. I couldn’t find out why exactly it is called that but if you know please make sure you leave a note in the comment so I can update the recipe with more details.

UPDATE: One of our readers had some great insight in to the origin of the desserts name. Here is what Nat said (original in comments)

Madlouka in Arabic means ‘spilled’ and in some instances could mean ‘poured’. I think this desert is called ‘madlouka’ because it’s first layer (the semolina cream) has the consistency of a thick liquid which obviously can be poured. It is true (colloquially) madlouk or madlouka is used to refer to a ‘spoiled’ person or more accurately to a person who lacks composure but I don’t believe the desert takes its name from this meaning of the word.

Before perfecting this recipe I asked many of my Lebanese friends what their experience was growing up and eating this delicious dessert. The response I got from each and everyone of them was a sigh of nostalgia followed by drooling and a longing for some Lebanese desserts. And once you taste it, you will understand exactly why that is.

How is it made?

Lebanese Nights Dessert is a three layer pudding. The base, is a semolina pudding made with milk and sugar. This is traditionally flavoured with rose blossom water or orange blossom water. Orange and Rose Water are very prominent in Lebanese cuisine. Which one of the two you want to use is really up to your own preference. Some people also make this dessert with a mix of both flavours. Living in Cyprus I found that a lot of Cypriot desserts have a Lebanese influence and use blossom water for flavouring. Lebanon after all, is only a 40 minute short flight away.

The second layer of Madlouka is an Arabic style heavy cream called Ashta. This has a similar flavour and consistency of clotted cream. Ashta cream is made by simmering whipping cream with milk, flour, corn starch and granulated sugar. You can also add the rose or orange water to Ashta cream but careful, you don’t want to overpower the overall flavour.

The last layer is made of roughly chopped and lightly toasted pistachios. Pistachios are also very prominent in Lebanese desserts, dishes such as Mafroukeh (Truffles) Maamoul Cookies and Shabiyat all contain pistachios for flavouring and texture.

This recipe doesn’t require a lot of ingredients, and its very possible that most of them area already in your pantry. So lets break it in to ingredients by dessert layer.

Roughly chop some toasted pistachios and spread over the top, voila.

Traditionally this Arabic dessert is topped with a sweet sugar syrup, personally I leave it out because it is sweet enough without the added sugar. If you want to keep it authentic though, here is the recipe for the syrup. You will need the following ingredients:

Combine all the ingredients in a heavy sauce pan, using a heavy saucepan will give you a more even heat. Thinner saucepans tend to heat in spots. Bring the mixture to a low simmer and cook for a few minutes until the sauce thickens. DONT caramelize it, it will crystalize and set if you do.

Let it cool and serve with the dessert.

Today I made some more of this amazing dessert and I had the opportunity to experiment on my syrup recipe. I tested two different types of dark sugar, Light Brown Sugar (Demerara), Dark Brown Sugar (Muscovado). I can honestly say that Dark Brown Muscovado was by far THE BEST flavour. It gave a beautiful aroma to the syrup making this dessert even more amazing. Well worth a try.

Layali Lubnan can be stored for up to five days in the fridge. But here are some pointers to make it taste fresh for each and every one of those day. First and foremost, cover the pan or dish with cling film or kitchen membrane. Making it airtight is essential to keep moisture in and other smells out.

Before putting any dessert in the fridge, let it cool completely BUT dont let it sit out for too long. There are two main reasons for this:

If you want to freeze Layali Lubnan, pack it in a freeze safe and airtight container before placing it in the freezer. The safest way to thaw any food is in the fridge and NOT at room temperature. So just move it from the freezer to the fridge, it will take about 24hrs to thaw. That being said, I have often thawed desserts at room temperature and I had no side effects to date, who wants to wait 24hrs for a sweet treat after all right ???

The history of Layali Lubnan

I have spent a good amount of research time to find when this delicious dessert was originally made. While I have not been able to trace the exact roots I found direct similarities with other Semolina Puddings in the middle east, Greece and Cyprus. Semolina is made out of Durum Wheat, and Durum Wheat originates from the middle east, so its no surprise that a lot of Arabic desserts contain semolina.

Additional flavouring such as Mastic, Pistachios and Rose water give the pudding its traditional Lebanese flavour.

My own twist (Optional)

While working on this recipe I came up with two modifications from the traditional method. If you are going for the traditional recipe, don’t add these steps. Both steps are optional and can be added individually or combined.

Philo dough crunches are a great addition between the layer of semolina and Ashta cream. Its really easy to add too, simply bake some ready phyllo dough sheets until they are golden brown and crispy. Now break them in to small flakes, after the semolina base has been spread and set, add a layer of phyllo leaves. You will need to be careful adding the cream as Phyllo dough is not very “sticky”. The best way is to spoon blobs of Ashta cream evenly over the phyllo dough until the whole surface is covered. Then use the back of a spoon and carefully spread it across the cream to straighten it.

I also made a Biscuit Crumble bottom was DELICIOUS. Its basically an Arabic style cheesecake (without cream cheese). For this version I used 250 grams of digestive biscuits and added 3 table spoons of butter and a quarter cup of sugar. Blend it all in a food processor and pack it in the base of spring form. Then just add the remaining steps of the recipe on top of the biscuit base.

Making Arabic semolina dessert is very easy but here are some tips & tricks to ensure your success.

So now that you know all the ins/out of making this delicious Lebanese dish, grab the ingredients and get started. If you have any questions, comments or corrections make sure you leave a comment so that all readers can benefit from it.

If you want to try some other dessert recipes, check out one of these: 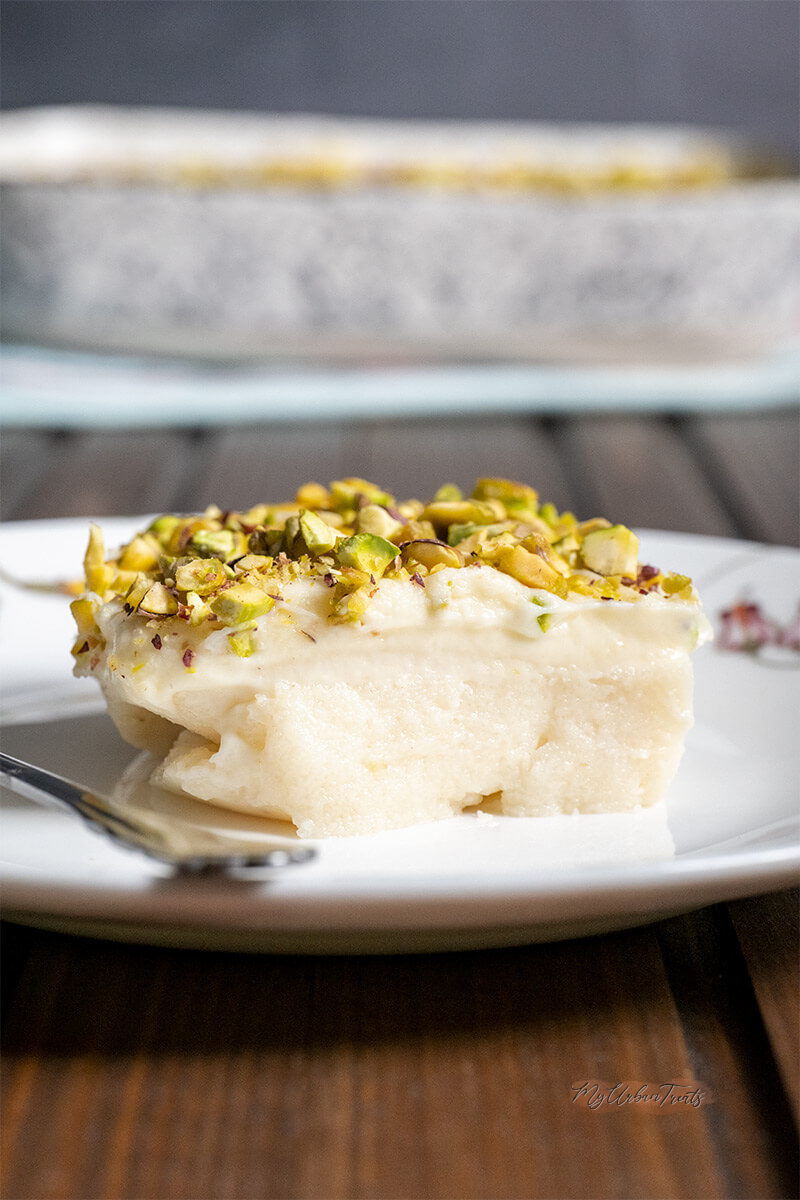