Hungarian sugar Rolls are a traditional dessert with a yeast dough base. It is quite similar to Cinnamon Rolls. While it does contain some cinnamon, it does not have the strong cinnamon/sugar taste in traditional rolls. Sugar Rolls are known as “Darázsfészek” which translates to “wasps nest”

The history of Hungarian Sugar Rolls is not very clear. Sugar Rolls like cinnamon rolls are most likely of Swedish origin. While cinnamon made its way from Sri Lanka more than 4000 years ago, it wasn’t until the much later that swedes made wrapped yeast pastry with cinnamon and cardamom.

The ingredients for Darázsfészek are very basic. Here is what you need.

How to make Hungarian Sugar Rolls

Yeast needs warmth but not heat. Combine the yeast with lukewarm milk and rest for 10-15 minutes to activate the yeast. Add the flour, egg, lemon zest, and salt and knead well for 5-6 minutes. Cover with clingfilm and let it rest for 20-30 minutes in a warm but not hot place. Once it has doubled in size, stretch it out to a rectangle that’s just under 1cm thick.

Soften the butter, you can do this by letting it warm up to room temperature. If you only have cold butter and you need to soften it, beat it with your mixer until soft enough to spread.

Now combine the soft butter with the sugar, ground walnuts and add a couple of table spoons of warm milk to soften it even more. Whisk until well combined and then brush evenly across the top surface of the dough.

Now starting on the long side of the rectangle, tightly but carefully roll the dough up in to a long thick roll. Then cut of slices which will form the individual Darázsfészek rolls. The best thickness is around 3cm or just over an Inch. Place then cut side down on a baking tray. Make sure you give them adequate distance as they will grow.

Cover with a kitchen towel and let them rest for another 30 minutes before baking.

Preheat the oven at 180 Celsius or 350 Fahrenheit, remove the kitchen towel and put the sugar rolls in to the oven. Bake until golden brown. Now combine the vanilla sugar with the milk and stir. Spread over the sugar rolls and bake for a few more minutes.

You will know they are ready when the milk starts to bubble.

You can also add raisins just line in the picture above.

I hope you enjoyed this recipe, if you have any questions don’t forget to leave a comment and I will get back to it right away. If you are looking for other dessert ideas check out the links below. 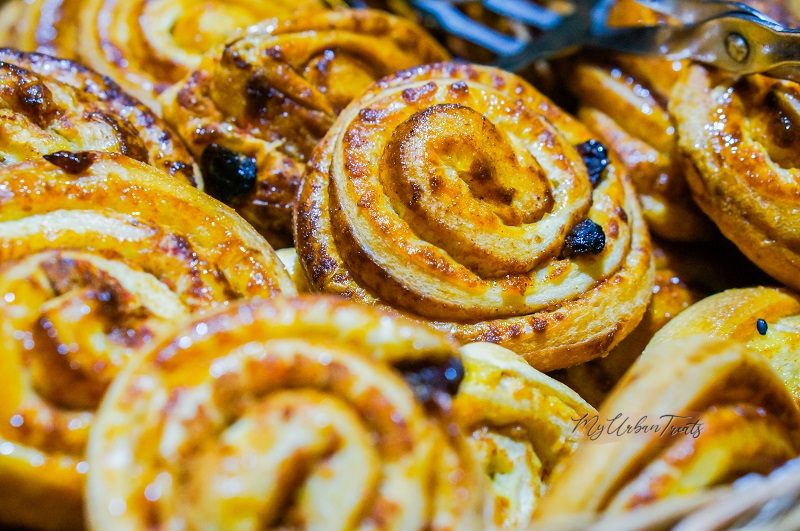 A well known Sugar roll recipe with Transylvanian origin known as Erdélyi darázsfészek which translates to "wasps nest". These amazing cinnamon rolls are always a hit with family and friends. They are not difficult to make and can easily be made with things any hobby baker has at home.
Servings 16 Rolls
Prep Time 30 mins
Cook Time 40 mins
Proofing 1 hr
Total Time 1 hr 40 mins

Food Advertisements by
Like 1
Close
My Urban Treats © Copyright 2021. All rights reserved.
Close