Marble cake is a German / Austrian dessert made by combining dark and light cake batter and forming swirls that resemble marble stone. Marble cakes comes in various shapes and patterns, it can be round, in a Bundt shape or loaf shape. The most common version is dark and light marble but with the magic of food colouring, you can go wild and create a ton of colour combinations.

Today we are baking a traditional Austrian Marble cake, a recipe passed down from four generations in my family. Here is how its done.

As with a lot of Austrian and German cakes, the beauty is in the simplicity. When this recipe was invented in somewhere between the 19th century, people didn’t have a lot of ingredients at their disposal. Cakes where made from basic pantry items such as Flour, Sugar, Egg, Milk and some chocolate.

Before the 19th century, chocolate was actually a rare commodity, it wasn’t until the late 19th century that changes in production made it widely available. But our ancestors where creative, they made something delicious with the little they had and thus we have Marble cake today.

With the addition of a few modern ingredients, 21st century marble cake is moist and rich in flavour. So here is what you will need:

Here are some questions often asked around the web regarding Marble cakes.

Traditional Marble cake has no filling or frosting, but if you want to add frosting, Chocolate Butter Frosting is a great choice

How do you make Pink Marble cake?

Pink Marble Cake is made by adding red food colouring to the vanilla batter of the cake. Pink matches best with Yellow so you can omit the chocolate from the recipe. Some cakes refer to Pink Marble as a fondant icing, this is achieved by rolling different fondant colours together.

Why is it called Marble Cake?

The combination and way of mixing the coloured batter creates a pattern that resembled marble thus the name Marble Cake.

Is Marble Cake white or yellow?

Due to the addition of egg yolks, most sponge cakes are actually a shade of yellow. You can get cake batter closer to white by leaving out the egg yolks. Instead substitute each egg with one table spoon of apple cider vinegar. It won’t leave any vinegar flavour but will achieve the same levelling effect.

The History of Marble Cake

Marble cake has been around for some time, the first written record of Marble cake is in Mrs Porters New Sothern Cookery Book which was released in 1871. But its estimated that this German / Austrian cake has been around since the earl 19th century. And although we don’t have a written record, we know that cocoa powder wasn’t around before the 1800’s giving us a good timeline.

In Germany and Austria Marble Cake is known as Marmorkuchen which pretty much translates word for word to the same name and is enjoyed with a cup of coffee or tea.

On the 23rd of September 2018, Saudia Arabia celebrated its 88th National Day, for the celebration Betty Crocker was tasked with an amazing feat. Baking the biggest Marble Cake in the world using Betty Crockers Cake mixes. The cake required more than 15,000 cake mixes, 30 Bakers and almost 8 hours of baking. While the cake is listed as a Marble Cake, it is actually a Mug Cake mosaic made up of 19600 mugs.

Classic Marble cake is simple, but that doesn’t stop us from being creative. Here are some filling, topping and side ideas for your cake. 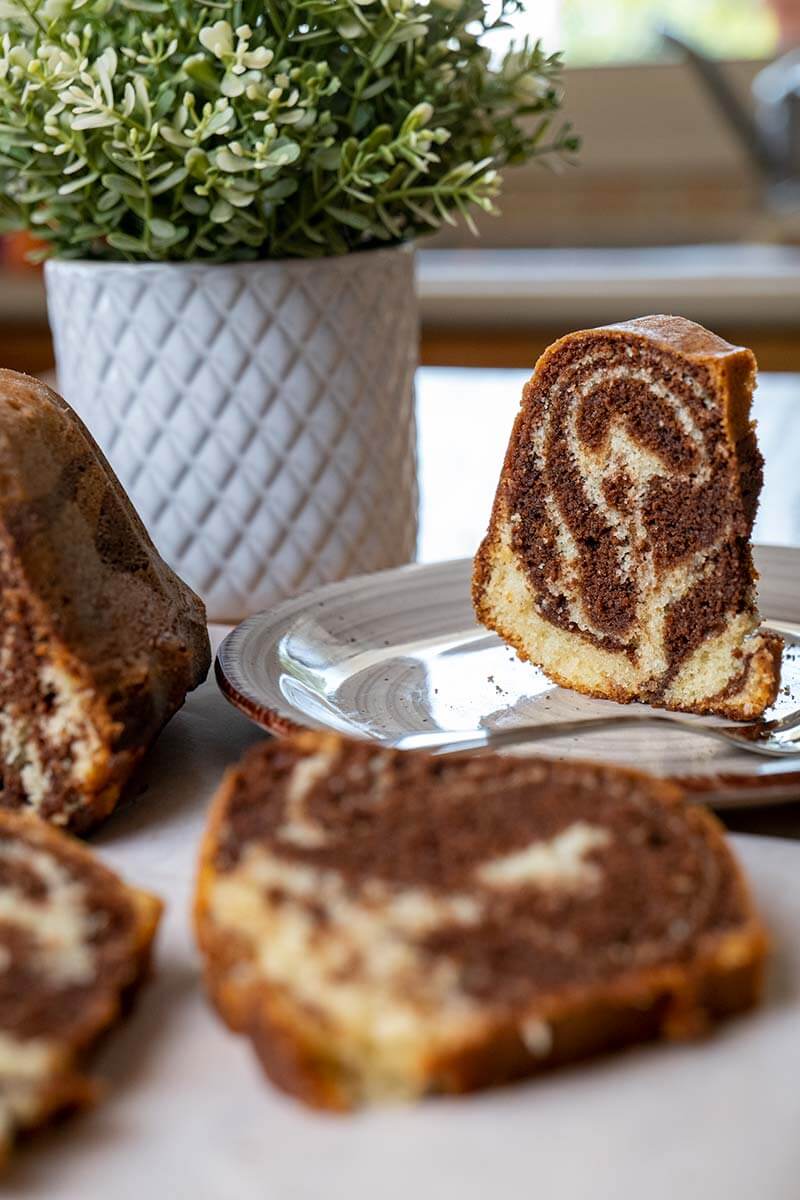