The ingredient label claims that the Frosted or unfrosted Strawberry pop-tarts contain strawberries, apples and pears, although no mention is made on the amount of strawberries and the ratio to the other fruits in the recipe.

So where does this lawsuit come from? Well it didn’t take much digging to reveal the brains behind this case. New-York based attorney Spencer Sheehan has filled more than 400 lawsuits targeting food products across the US on every supermarket and grocery store shelf.

The cases range from deceptive labels, to incorrect ingredients such as:

There are also more than a hundred cases against products claiming to contain vanilla when in reality most of them contain Castoreum which is a compound extracted from a beavers castor sacs. If you don’t know where castor sacs are located, check out the image below, it might change your mind about using artificial vanilla in recipes in the future 🙂

When I first heard about this, my mind thought, another cash grabbing lawsuit. But as I researched the subject further, I found myself on the other side of the coin. Most large consumer products are very well researched, companies study their consumers and create marketing campaigns that will obviously sell their products. But there is no transparency or honesty in this process, if they can raise profits by replacing ingredients that “taste similar” but are cheaper, they will do it. If they believe they can get away with-it they will do it. So maybe its good that someone is sticking it to those mega corps that have no issue misleading its consumers? On the other hand, will it make any difference for the future? Who knows.

The lesson learned here is, if you want a pop-tart thats filled with REAL ingredients, MAKE IT AT HOME 🙂 Its simple and tastes a million times better. And guess what, you can use all the best ingredients and get exactly what you want. Here is my very own Pop Tart recipe, fill it with 100% strawberry jam and bob’s your uncle. 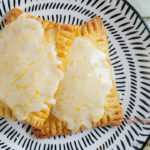 Homemade Lemon Pop Tarts Recipe
Delicious Pop Tarts stuffed with my grandma's lemon curd. Learn how to make these delicious mini pie's that you can freeze and bake straight out of the freezer.
Check out this recipe

5 Romantic Dinner Ideas For A Date Night At Home

How to make the best Pie Crust

9 Versatile Pantry Staples to Always Have in Your Kitchen